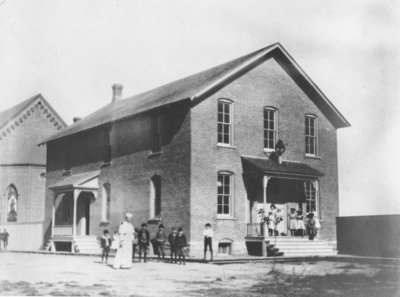 In 1898, Bishop Messmer assigned St. Joseph's Parish in De Pere, to Father Pennings and his Norbertine companions, five years after the arrival in Wisconsin, on September 28, 1898; Father Pennings moved his headquarters to West De Pere. Pennings established St. Norbert Priory at St. Joseph's Shrine in De Pere. Pennings was then appointed first prior and began his educational work. Father Broens was the pastorate of St. Joseph Shrine and took care of pastoral duties.

By early 1899, Pennings announced through the Annals of St. Joseph that plans were being prepared for the building of a new convent for the father now in charge of the shrine. On September 8, Pennings blessed the new Norbertine house and college, 26 rooms in all, now the three-story addition built between St. Joseph Church and St. Norbert Convent. It had been used for St. Norbert College classes and residence for the Norbertines. Pennings had appointed Father Hukmans as first rector of St. Norbert College.

Later in 1925, the parent institution, the original West De Pere Priory over which Father Pennings presided, was raised by papal brief to the rank of an Abbey and Pennings was appointed the first Premonstratensian Abbot in the Western Hemisphere.